As pre-orders begin for the Modbook Pro in the United States, here’s what you need to know about this ‘mac in tablet’.

Described by the company website as “the world’s most powerful and largest-screen tablet computer”, the Modbook Pro is a tablet PC with a 13.3 inch display and high-performance SSD storage. Think of it as a modified MacBook Pro with a touch screen and pen tablet that allows you to draw on it.

Surprisingly, the Modbook Pro is not really a new product. As Ars Technica’s Jacqui Cheng explains in her article, a company called Axiotron had the idea of presenting the MacBook Pro in tablet form before even Apple did, and their product, the Modbook Pro was actually available for sale between 2008 and 2010.

However, once the iPad arrived on the scene, the Modbook Pro gradually went off the radar. Some attributed it to iPad supremacy, others cited legal issues with Apple. However, CEO Andreas Haas now claims that it was lack of capital that forced the company to shut down. Cut to 2012, and Haas, a former Apple employee, has reintroduced the new and improved Modbook Pro through his new company, Modbook Inc. 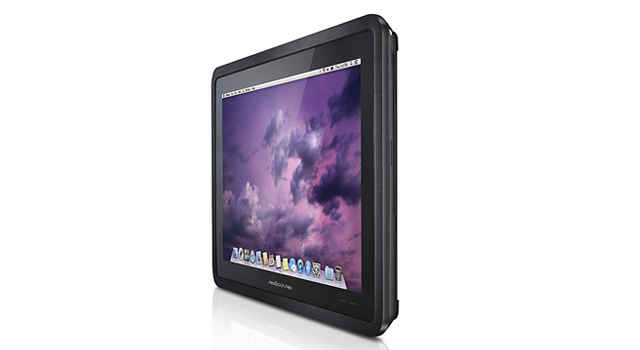 The new Modbook Pro has shed its former bulk and seamlessly integrates the Apple motherboard while at the same time offering features that make it stand on its own merits. Besides the preinstalled OS X Mountain Lion, the Modbook Pro allows you to install Windows 7 as a secondary OS, giving you the best of both worlds. In fact, Haas claims that Modbook’s largest single user base prefers to use it exclusively on Windows, news that Apple might not particularly want circulating in the market.

The overall look of the Modbook may not be as glossy as an Apple product, but it seems it’s a sacrifice made for better usability in terms of design. Take the bezel framing around the Modbook screen which makes it convenient to hold and work on at a stretch. Users can also build a full desktop setup with up to two standard or Wacom pen-enabled large-screen displays, upgrading the built-in 1280X800 pixel screen to a maximum of 5020X1600 pixels.

The general consensus is that if there is only one thing about the Modbook Pro that will come in the way of its success the second time around, it is the product’s prohibitive pricing.

So who is the Modbook Pro targeted at and are they going to bite? It seems it’s primarily aimed at creative professionals like artists, graphic designers and animators who feel stymied by the iPad’s limited drawing area and RAM options. As Cheng quotes Haas in her article,

“Almost everyone has an iPad or iPhone. I wouldn’t want to live without it. But as a company, we are looking at a very distinct niche. The creative industry does not have a product that meets their need to draw on a real computer’s screen and have it be portable. It’s just not out there.“

Well, it is now. But iPad and MacBook Pro aficionados in India may have a long wait in store since Modbook Inc. has no concrete plans of taking orders from outside the United States for now, preferring instead to test its product on local shores.