Two and a half months into buying my BlackBerry Curve 9220, I found the battery life to be very poor, especially compared to my previous phone – the Nokia E63 in which the battery lasted for three days straight. I also noticed that the phone would heat up quite a bit during use. I began to wonder if I’d bought a defective piece, but a little bit of asking around and surfing the net helped me figure out what was going wrong.

Now I rarely indulge in long phone conversations or marathon texting sessions. But the battery power on my BlackBerry 9220 would get depleted in as little as two hours. I do, however, browse the internet on my handset, but even that’s quite limited, and I didn’t realize that there could be a connection between internet browsing and battery life.

Turns out there is. What I didn’t realize and what a friend pointed out was that the Wi-Fi in my phone was activated and every time I surfed the internet, there would be an automatic search for available networks. This constant searching was a big drain on battery power and also caused the phone to heat up. 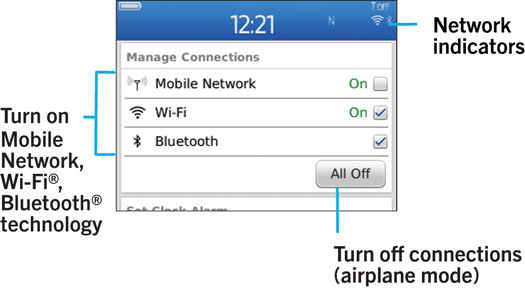 What to do: To check whether the Wi-Fi option on your phone is turned on, click on the topmost panel on the home screen and see Manage Connections (other BlackBerry users will find the icon in their inner menu). Check to see whether the Wi-Fi option has been checked. If so, uncheck it. You’ll immediately find a marked improvement in the phone’s battery life.

Too hot for comfort? Monitor the temperature

Even after solving my problem with the battery, my BlackBerry 9920 continued to heat up, especially during charging. I rechecked the settings to see if I had carelessly activated some option. I hadn’t.

So I browsed some BlackBerry forums online and found my answer. It turns out there was nothing unusual about the handset warming up while it is being charged. Up to 50°C should be fine, although the battery doesn’t normally heat up beyond 42°C. 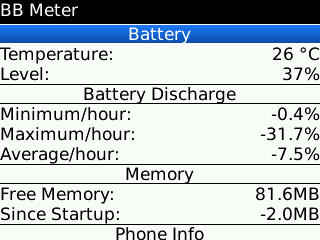 Not only does this app monitor the battery level, it also gives you handset temperature updates corresponding to battery charge levels. The application is called Tiny Meter and it can be downloaded for free from BlackBerry App World.