Like Neelam Sandwich Centre, Shree Krupa Bombay Vada Pav was also introduced to me by my sister. And even though I’m not into vada pav despite having now spent so many years in Mumbai, I hold this place as an exception!

On my first visit here (also known as the Vijay Chaar Rasta vadapavwala) with my sister, I expressed my reservations about the beloved ‘desi burger’. But my sister insisted I try this one, telling me “it’s different, like Maggi Hot and Sweet”. I was a convert on the first bite – it was heavenly! The best vada pav I had ever had. I thought this place was our special little discovery, but over the years I came to find that this vada pav joint is a regular haunt among students after school or college hours, and office goers on their way home. 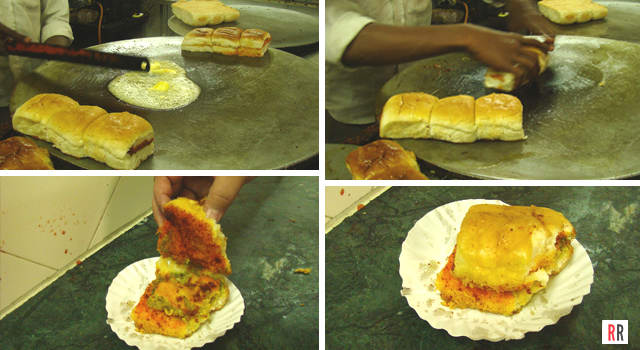 After placing our order, we stood next to a huge hot tava (skillet) which sizzled with ample amounts of butter. To this, a dark red garlic chutney was mixed with some rhythmic swishes of a long, sharp knife. Once ready and bubbling, this swirling sea of cholesterol became the Atlantic Ocean for some Titanic pavs. I mean it – the pavs literally drowned! Once sufficiently soaked, a splash of green chutney was added to the pavs and a piping hot vada fresh out of the kadai (wok) made its way in between the two pieces.

When I first came here, this eatery operated out of a street side cart, but today it’s a full-fledged outlet. There are four varieties on offer – oil pav, butter pav, Mumbai pav and cheese pav. A further gradation is made on the amount of heat – mild, medium or tez (really spicy). The cost ranges between Rs. 10 and Rs. 20.

As usual, I thought one vada pav would suffice but ended up eating two. The prospect of returning to Mumbai is beginning to take on unpleasant dimensions since I know it will mean setting a serious exercise routine to burn the excess weight I’m sure to pile on during this trip!

Please note: Two other vada pav eateries have set up shop nearby, trying to shine in the afterglow of Shree Krupa’s fame. But don’t be fooled until you come upon the original!