Not a Windows Phone convert yet? Well, it’s about time, especially since Nokia is expected to launch two more models – the Nokia Lumia 1520 and Lumia 1320 in Delhi on November 16.

Despite its recent entry into the smartphone market, the Windows phone is already the second most widely used smartphone platform in India, said a recent IDC Asia Pacific Mobile Phone Tracker report (April-June 2013). Having already defeated Apple iOS and Blackberry in popularity, Nokia’s new large-screen phones may just be the wow factor needed to get even more consumers to try out the Windows 8 OS, now in its updated Lumia Black version.

Flaunting a 6.0-inch full HD (1920x1080p) AMOLED display with 368 ppi (pixels per inch) pixel density and a 2.2GHz quad-core Snapdragon, the Nokia Lumia 1520 is Nokia’s first phablet and is being touted to be the best Windows Phone 8 device on the market. This high-end phablet is expected to be priced upwards of Rs. 45,000. As with all Nokia Lumia phones, the camera is the hero – a 20.0-megapixel main camera (with LED flash, 6-lens Carl Zeiss optics, OIS and more) and a 1.2-megapixel wide angle front-camera. The Lumia 1520 has 2GB RAM and 32GB inbuilt storage (expandable up 64GB). The Lumia 1520’s competitors are the HTC One Max, Samsung Galaxy Note 3 and Sony Xperia Z Ultra. 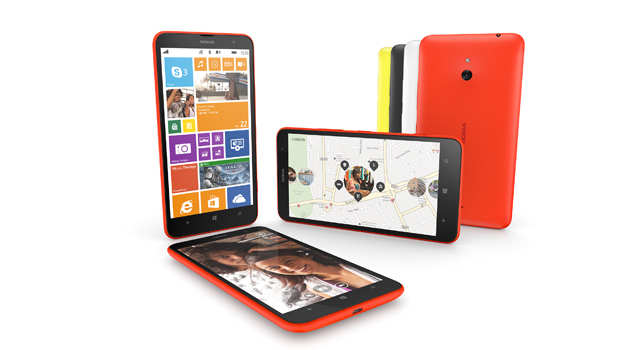 Being positioned as a low-end version of the Lumia 1520, the Lumia 1320 features a 6.0-inch HD (720x1280p) IPS LCD screen with 245 ppi (pixels per inch) and a dual-core snapdragon S4 processor with 1GB RAM and 8GB inbuilt storage (expandable up to 64GB). On the camera front, the Lumia 1320 is clearly inferior with a 5MP rear camera and a VGA front camera. The Lumia 1320 is expected to be priced at a very attractive price of roughly Rs. 21,000 and will be in the same segment as the Micromax Canvas Doodle 2 and Karbonn Titanium S9.