Of all the reasons to switch phones, the inability to download Google Hangouts may sound a little drastic. But that’s our reviewer Krisha Alwani’s story.

When she got engaged, she was a happy Nokia Lumia 720 user. She loved the vibrant Live Tiles experience and the bright yellow body of the phone, and as she says in the review, she chooses style and colour over tech specifications any day. But her fiancé was living abroad and the one major way of keeping in touch with him was through video chat. Krisha’s Nokia Lumia 720 would not support Google Hangouts and the built-in Skype app would make her phone crash every time she launched it. That’s when she bought the LG Nexus 4.

Being a first-time Android user, Krisha was a little underwhelmed by the user interface which she found “standard and boring”, reminding her of her old BlackBerry. But as she began using it, she found the Nexus 4 more than made up when it came to utility. And she credits most of it to the phone’s operating system –the Android 4.4 KitKat.

Design: Krisha likes the classy, utilitarian design of the phone. The glittery back gives the Nexus 4 that glam factor and the bumper cover is unobtrusive but adequate to protect from bumps and knocks.

Software: Krisha is a first-time Android user and the platform offers her little conveniences that have made her life simpler. She talks about this in the video.

Google Cards, for instance. Now that she’s married, Krisha is new to Dubai and getting to know the city. Google Cards tell her the frequency of buses on her route so she steps out in the hot sun only when a bus is nearing. 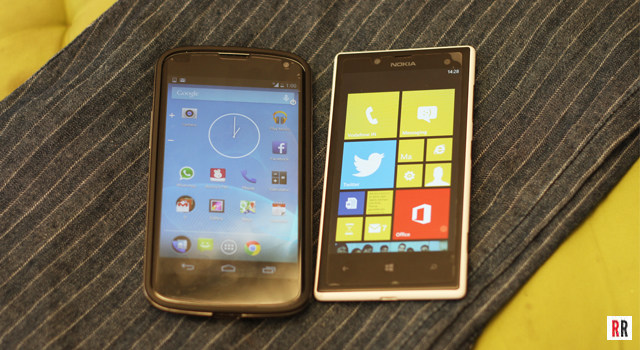 Google Voice functions: Not only does she find the voice navigation feature on Google Maps cool and futuristic, Google Voice Search further simplifies her life in the kitchen. She no longer has to type search for recipes with greasy fingers; she can just talk into the phone and Google turns up the search result for her (see the video for a quick demo).

Swipe Texting: Krisha is also a fan of the swipe typing feature on her Nexus 4, compared to the one-by-one texting on her old Nokia Lumia 720.

Auto Sync and Auto Backup: She loves that all layers of contact information have been pulled into her phone from Google and vice-versa, saving her the headache of creating a contact backup elsewhere on her computer in case she loses her phone. Another plus, especially for the Nexus 4 with its non-expandable memory, is that she doesn’t have to worry about her phone memory running out since all the photos she clicks on her phone are automatically uploaded to her Google+ account. So she can go ahead and delete them from her phone.