A few of us here at Real Reviews simply love our food. We also love food stories – you know, stories about how certain dishes or ingredients came into being, their evolution and why they became popular or faded into anonymity.

So when one of us brought a packet of Anzac Oatmeal Cookies to our weekly meeting recently, it wasn’t long before we turned to Google to find out more about it.

What piqued our interest were the mysteriously contradictory statements printed on the packet. While the line ‘Supporting India’s Jawans’ appeared above the brand name, just a few centimetres below was the declaration that these were ‘Australia’s Favourite Cookies’! 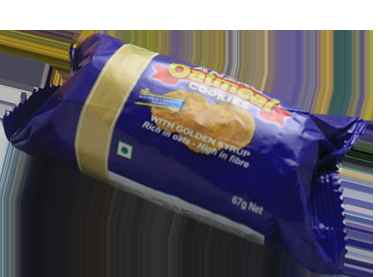 A few minutes of scouring the Internet threw up these facts about Anzac biscuits (not cookies, mind you – we’ll come to that later).The main ingredients of Anzac biscuits are rolled oats, desiccated coconut, sugar and butter. Originally a Scottish recipe, it was only during World War 1 that they entered popular memory because of two reasons:

1. Their hardy nature (since the ingredients didn’t spoil easily) which made it convenient for the Australian and New Zealand Army Corps (ANZAC) to ship them in bulk to their soldiers posted abroad.

2. It helped that the biscuits were egg-free, given the shortage of eggs in the country after most poultry farmers were drafted into the army. As the war drew on, church groups, schools and women’s organisations famously devoted a lot of time to making these biscuits.

With such a rich patriotic history, Australian biscuit manufacturers Unibic decided to contribute 3% of every purchase of Anzac oatmeal cookies in India to support jawans and war widows in the Indian army, an act of charity they probably replicate in every country that they sell the product in. But we wonder if and when Unibic will be coming out with ads to inform Indian consumers about this awesome fact and more importantly, whether this knowledge will actually boost sales.

But wait, there’s more! If you’ve been a Subway regular ever since the franchise entered India in 2001, you may have noticed that the erstwhile honey oatmeal cookies that would call out to you seductively from behind the cash counter have been conspicuously missing the past few years. You can blame it on Anzac!

So the deal is, because of its military history, the word ‘Anzac’ is protected under Australian law. But because these biscuits are so universally popular, Anzac biscuits are generally exempt from this law. However, if biscuits made of rolled oats are produced commercially anywhere in Australia, the government seems to want its say in the matter. That’s what happened in 2008, when the Department of Veterans’ Affairs ordered Subway outlets in the country to bake the biscuits they were selling according to the original recipe.

However, in a classic show of American arrogance, Subway decided to stop the sale of the biscuits, stating that they could not find ‘cost-effective means’ of duplicating the recipe. The Australian government also insists that we call them Anzac biscuits and not cookies, so we wonder how Unibic managed to hop over that loophole.

Not that it matters in India, where most of us are still trying to wrap our heads around what makes a cookie different from a biscuit!

Availability: Distribution is still quite poor – we don’t see them in most shopping malls in the city

We really like these cookies, especially soaked in our afternoon chai. What do you think? Drop us a line in the Comments section below.