If you’re into baking cakes and other desserts, you must often have wondered about the difference between vanilla extract and vanilla essence. Different recipes call for either, but it’s important to understand how the two differ.

Before I found out what vanilla extract was, I would feel I was missing out by using vanilla essence as a substitute. That’s because almost all international dessert recipes call for vanilla extract. However, when I finally began using it, I found hardly any difference in the taste of the final product. But when it comes to cost, vanilla extract is far, far more expensive.

Basically, if you like to use organic ingredients, natural vanilla extract is what you should opt for. To make the extract at home, keep a slit vanilla pod in an alcohol base like vodka for 3-4 months. Over a period of time, the flavor from the vanilla pod gets infused into the alcohol. Vanilla essence, on the other hand, is artificial and made using chemicals to recreate the flavor of vanilla. 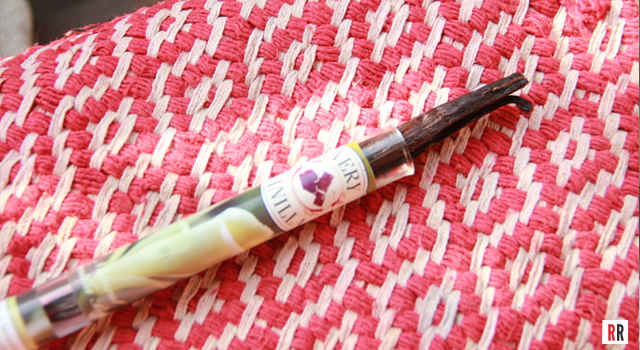 You can also make vanilla extract by boiling a small piece of vanilla pod in a little water and use that water for flavoring. Alternately, slit open the pod and scrape out the vanilla beans which you can use directly in your dish.

Vanilla pods are quite expensive though – an average of Rs. 195 for three pods – but making your own extract is a lot cheaper than spending anywhere between Rs. 400 to Rs. 800 for a 60 ml bottle of vanilla extract (the bottle you see in the pic below is from Marks & Spencer). A bottle of vanilla essence (Bluebird, Marson and Voila) costs only Rs. 125 for 100 ml.

I always have ample vanilla extract in my fridge and I use it mainly in custards, ice creams and in my recipe for homemade vanilla latte.

The choice between vanilla extract and vanilla essence mainly depends on what you’re using it for. For the vanilla latte, for example, I would recommend the extract because vanilla essence is too strong for the drink and sometimes gives it a bitter aftertaste.

Just a few tips: in my experience, too much artificial flavoring leaves a bitter aftertaste, especially in coffees and cookies, so be careful about that. Also, always add the extract or essence after the custard or pudding has been taken off the flame.