It won’t charge your iPad

First up – the Mili, with its charging capacity of 2,000mAh is not powerful enough to charge the iPad. On connecting it to the iPad, the tablet read ‘Not Charging’.

But it is not meant to charge the iPad, anyway.It is a portable USB power pack designed to power smaller handheld devices on the go, like phones, iPods, iTouch.

It fits in the palm of your hand and is super-light at 64 grams, but the build is certainly not flimsy. This unit comes in a range of vibrant colours other than just black and white – blue, green and orange.

The Power Crystal comes with 6 connector pins – which include a micro and a mini USB – that can charge almost all devices. And since it is a USB charger, it can also charge your iPhone, which may not be compatible with any of the given pins, but comes with a USB adaptor. Or for that matter any other device sold with a USB adaptor.

Carrying these small pins separately could be a bother. But that can be taken care of by a customized case, which costs extra. 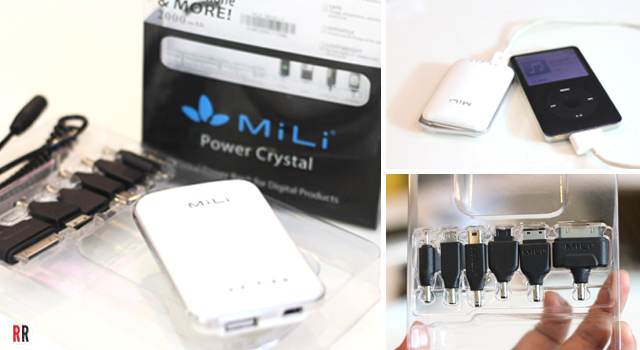 The Power Crystal can be charged by connecting it to the USB port of your PC, your laptop or your car dashboard.

The Mili website claims that it takes 4.5 hours for the device to charge completely using a laptop, but we had to wait 5.5 hours to get it fully topped up.

The 4 LEDs on the front face of the charger indicate the battery status. Four lit LEDs indicate full charge.

How far can it go on full charge?

In terms of performance, the size betrays the Mili’s utility. I charged an old Nokia phone completely with the first 25 percent of the Power Crystal. The next 50% charged a fully drained Blackberry curve, and the last 25 percent gave 25% on the iPod, which makes it a great travel companion because you won’t have to charge it frequently.

Compared other brands – for instance the SmartFish Portable Power Plant we wrote about earlier that costs Rs. 2,285 with charging power of 5,600 mAh, the Power Crystal with 2,000 mAh seems pricey at Rs. 1,990.

In the 2,000 mAh league too, the Power Crystal costs almost Rs. 600 more than the Sony Cycle Energy (review coming shortly) which has the same charging capacity.