Mumbai-based MBA student Ankit Shah has much to say about his latest LG Nexus 4 E960. To sum it up right  at the start, it’s all good: he feels it’s the best smartphone around in its price league and he tells us why in this video.

Display: With the phone’s Gorilla Glass screen, Ankit confidently goes around without a scratch guard and despite it having taken three or four falls, there are no scratches to be found. Even the glass back, he says, has proven to be sturdy, unlike what some other online reviews are saying.

Touch: He finds the navigation simple and the touch very responsive and smooth, especially when it comes to playing his favourite games: Temple Run and Angry Birds. He says he’s found the best gaming experience on this phone.

Jelly Bean Android 4.2.2: Ankit says this phone offers a “true Android experience”, and what impresses him most is the speed of app updates, given it runs on 4.2.2 Jelly Bean. Also the phone gives him access to over 3,000 apps designed for Android, which he considers a big advantage. He goes as far as to say the LG Nexus 4 is even better than the iPhone 5, which is way pricier and has far fewer apps. He recommends this phone to all the ‘appoholics’ out there. 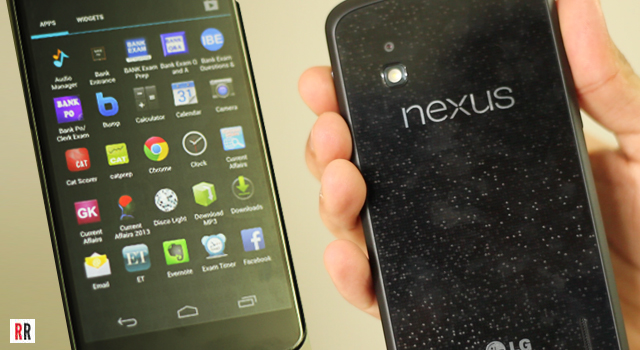 Ankit also likes the new feature that most latest Android phones have – a screen you can pull over your home screen and access frequently used features like Settings, Wi-Fi, Bluetooth and screen brightness at one place.

Sound: The sound output he told us off camera is nothing remarkably different from other smartphones around.

With a Key Lime Pie (Android 5.0) update in the works and rumored to already being secretly run on Google Nexus 4 and 7 phones (http://gadgets.ndtv.com/mobiles/news/google-nexus-7-and-nexus-4-spotted-running-android-key-lime-pie-402381) , the Nexus 4 is not likely to lose its edge anytime soon, says Ankit.

He gives the software and hardware a 9 on 10 for its price.