After our disappointing experience with homegrown biscuit brands – see here and here – we decided to try out McVitie’s which, because of the price factor, definitely falls under the premium category of biscuits and cookies. We were expecting another disaster but were (finally!) pleasantly surprised.

We picked up two McVitie’s offerings – HobNobs which are wholewheat, oatmeal and honey cookies (Rs.30 for 120 gm), and Fruit Bakes (Rs. 50 for 150 gm) that are touted as cookies with real Mediterranean fruit bits. Some Real Reviews team members have tasted McVitie’s earlier and have high opinions about the brand. For the rest of us, our first reaction was ‘Fifty bucks for a packet of cookies??!!’

But before we get to the pricing, let’s talk about the taste. McVitie’s HobNobs are deceptively crisp and light. They are also extremely addictive, which is a bad combination for your waistline. The sharp notes of honey and sugar, coupled with the texture of the oatmeal, and the overall freshness of ingredients make them seem like something that’s just come out of your oven. And they fill you up instantly.

McVitie’s Fruit Bakes are definitely far richer in taste and look. The exact nature of the fruit had us stumped though. The packaging shows blueberries, but the ingredients column on the pack lists only currants. Regardless, the chewiness of the currants adds another dimension to these cookies but doesn’t overpower them.

Not only do both these sugary cookies taste great with say, a cup of tea, but they can also make a good end to a meal, especially if you’re craving a treat but want to limit your calorie intake. 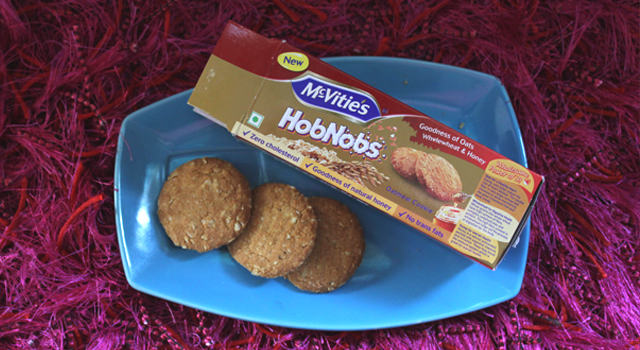 The fibre content of McVitie’s HobNobs oatmeal cokies is much higher (6.24 gm) than biscuits from home-grown brands. You can actually feel the texture of the fibre with every bite. In Real Reviews team member Manisha Sharma’s post on carbs, she had gone into detail about the benefits of fibre. Among them is that fibre keeps you full for a longer time, making it an ideal snack for when the munchies hit.

Some might think the pricing is too steep, but it depends on what your expectations are of the product. Manisha, who is a former nutritionist, says if you are looking for just a tasty biscuit, she agrees there are other cheaper alternatives. But if health is a priority and you’re looking to include more fibre in your diet, then opt for the oatmeal cookies.

At 469 kcal for 120 gm, 1-2 biscuits are enough to fill you up. And before you gasp at the calorie count, this figure would hold true for most biscuits – both sweet and salted – of any brand, which average between 450 kcal to 550 kcal for 100 gm. But since these cookies are so filling, Manisha says you’ll eat fewer and therefore consume fewer calories.

McVitie’s Fruit Bakes are also high in fibre but not as high as the HobNobs which are the ones we’d recommend for when you are on the move or when craving something sweet.

Are they worth the price tag? 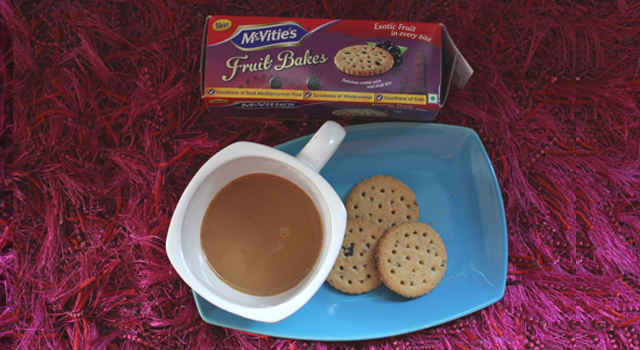 So are these cookies from McVitie’s worth the price? Actually, they are because they are just plain delicious, a fact that we all agreed on – even the ones who were initially wary of the brand when they first heard of the price.

For only Rs. 10 more than most other biscuit brands you find on grocery shelves, McVitie’s HobNobs are not just a far tastier option, but a healthier and more economical one too. Definitely a must-try and we bet you’ll keep coming back for more.

Meanwhile, McVitie’s Fruit Bakes does not have us as strongly convinced, mostly because of the dubious nature of its fruit content. A bit more clarity on that front would be appreciated.

Both McVitie’s HobNobs and McVitie’s Fruit Bakes are manufactured in India but obviously, McVitie’s exacts stricter quality control on its products than other homegrown brands. And it’s easy to tell the difference.