In this video, 19-year-old Viram and Jeet talk about their shaving experiences, and the trimmers and razors they have settled on after three years of trial and error. Here they review the Panasonic ER-GY10 trimmer, Gillette Proglide and Gillette Mach III razors.

Viram started with a trimmer, not a razor. Here’s why.

Viram who started shaving at 16 chose a trimmer because his acne-prone, sensitive skin may not have responded well to shaving creams and foams. With a trimmer, that was out of the way. He also did not want a hard hair growth he’d heard a razor leads to.

His trimmer of choice – The Panasonic ER-GY10

What made Viram buy the Panasonic ER-GY10? Because this one had different attachments for facial hair, body hair and so on.  He says this trimmer gave him a clean shave without irritation. 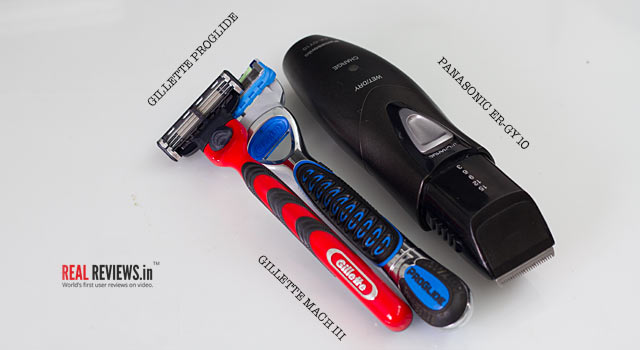 Viram moved to a razor because …

The trimmer was fab but it was time to move on to denser facial hair and a really close shave, both of which Viram heard could be accomplished with a razor. So he moved to the Gillette Proglide vibrating razor. The vibrating razor has six blades and a gel strip for smoother shave. He says the vibrator gives him a better grip and prevents dead skin from collecting around the blades. Viram also explains Proglide can be used to shave in any direction, whether up, down or sideways without cutting the skin. The blade comes in a pack of 4 for approximately Rs. 500 and each blade is good for 5 shaves.

Jeet started with a Gillette Mach III and has stuck with it.

Jeet, unlike Viram, had his first shaving experience with a Gillette Mach 3 razor introduced to him by his father. And he feels it’s the ideal budget fit for him – One razor costs Rs.180 and lasts for 2 months – out of all the other Gillette models in the market. He has no complaints; the Mach III gets the job done just fine.

In this video, Jeet shaved off his month-old growth just for the review, and this is his verdict — he found the Proglide efficient, safe and totally worth the cost!