Amazon India has started shipping the Samsung Galaxy K Zoom for Rs. 29,999 (with Rs.6000 worth of offers for the first 1000 customers). Available in black, white and blue, you can also pick it up at Samsung retail stores across the country.

This monster camera variant of the Samsung Galaxy S5 has an attractive list of camera features – a 20.7 megapixels BSI sensor, 10x optical zoom, optical image stabilisation, 24-240mm lens with aperture value of f/3.1 to f/6.3. It also has auto focus with LED and Xenon flash. The phone itself sports a 4.8 inch Super AMOLED HD display with 1280 × 720 pixel resolution and is powered by a 1.3GHz quad-core plus 1.7GHz dual-core hexa-core processor with 2GB of RAM. And it runs on 4.4. KitKat with the same TouchWiz version packed in the Galaxy S5.

For those who don’t remember, the Samsung Galaxy K is the second camera-centric smartphone from Samsung. Precisely a year ago, the company had launched the Galaxy S4 Zoom. Much like its predecessor, the Galaxy K Zoom aims to provide consumers with the best of Samsung’s smartphones and its Android-powered cameras. 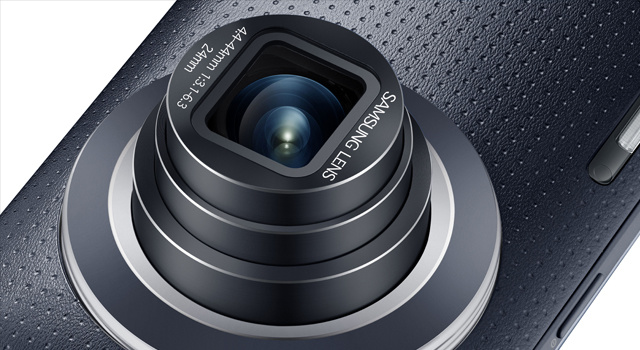 Internationally, reviews so far have been mostly positive but with some reservations. Andrew Martonik of AndroidCentral states the Galaxy K Zoom doesn’t go very far ahead from its flagship predecessor, except for a few tech upgrades and minor design variations, including a dedicated camera button on the side, a large cut-out in the back for a flash, and a slight overall weight reduction of 8 gm.

The video quality of the Galaxy K Zoom has also been brought to question by some, with exaggerated brightness and inconsistent audio recording being among the grouses. Meanwhile, David Nield of TechRadar gives his verdict:

“The Samsung Galaxy K Zoom certainly has its strengths, but ultimately neither the phone nor the camera are distinctive enough to appeal to the masses.”

However, the Galaxy K Zoom’s 10x optical zoom lens, a generous 24-240mm range and the fact that you can use it as a phone too, all for Rs. 29,999, will surely attract camera enthusiasts on a budget.