What is cool about SkyDrive is that unlike its cloud access competitors Dropbox and Google Drive, SkyDrive allows remote access integration and tools for collaboration.

Ever since the announcement of the app, people wondered if the mobile software would follow the Android user interface design guidelines. It does, although there are elements of Windows Phone as well.  While intended for Android 4.0 (Ice Cream Sandwich), the SkyDrive app will run on any device that’s 2.3 and over, and can be downloaded from Google Play for free.

All the standard SkyDrive features make it to this app – 25GB of storage, and you can view personal documents, shared documents, and recently used documents. The app also lets you upload multiple photos or videos from your phone to the cloud, and most importantly, allows other apps to open, edit and saves files stored in SkyDrive. 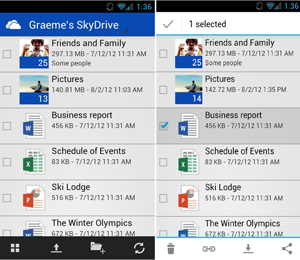 By letting users download and get accustomed to the SkyDrive app over the next few weeks, Microsoft is clearly preparing for the launch of the Windows 8 software and the new Surface tablet on October 26, as well as its impending battle with Apple’s OS X Mountain Lion.

Meanwhile, as an amusing aside that doesn’t bode well to the SkyDrive app and other cloud storage devices, read this article that quotes a United States which found that 51% of the respondents held the belief that a storm could interfere with cloud computing. On the somewhat brighter side, the survey also found that 95% of the respondents who stated that they don’t use cloud computing were actually found to do so – they just didn’t know it!