Isn’t it annoying when your earphones keep slipping out of your ears while you’re on the move? Admittedly, it’s a quintessentially #FirstWorldProblem, but we’ve all been there.

Well, somebody’s thought of a solution for it. Earhoox calls itself the cure for loose, uncomfortable earbuds. A pair of silicone hook-like pieces that fit around your earbuds and sit snugly in your ears. They’re sold in two versions – one for your regular earphones (earbuds) and another specifically for Apple earphones that are slightly different in construction (earpods).

We wrote to Earhoox and asked for a few pairs so that some of our reviewers could give them a shot. Among them, college student Aditya Bajaj’s review was the most enlightening!

We gave Aditya both the Earhoox for earbuds and earpods to try out. As he says in the video, he put the Earhoox to the test. From the hustle-bustle of a local train to trying them out while lying down in bed, they helped his earpods stay put in his ears. In fact, he even identified a slight noise-cancellation effect (due to the silicone material, not rubber as Aditya says in the video) with the Earhoox that’s not an official feature of this product. Aditya also found that his Earhoox for earpods fit his Nokia and HTC earphones as well.

There are, however, downsides. For $10 a pair and from the beautiful photos on its website, one expects a certain finish to the Earhoox, which were sorely missing from the ones that were sent to us. Check out the video to see the obviously poor production quality. The other drawback was the irregularity in the sizes of the Earhoox, where one pair fit snug but another was a bit too loose and didn’t feel quite right. 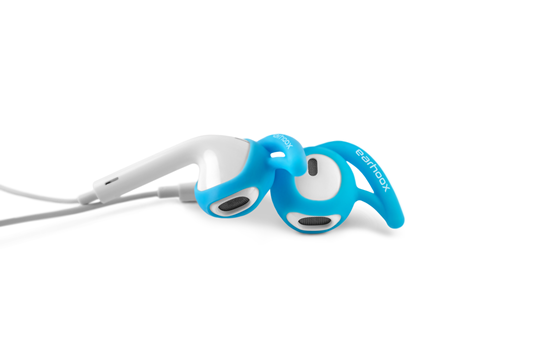 Product: Earhoox for Earphones and Earpods
Available in: Black, White, Blue, Pink & Green
Price: $10 for a pair (approx. Rs. 630)
Would we buy it? Although effective, the mismatch between price and production quality would make us think twice!
Order from: www.earhoox.com