Steve Lenny is a management consultant based in Dubai; His approach to technology is completely user-experience and common sense driven. In this review, he belatedly reviews the iPad 2 for those on a budget and those who aren’t too hung up on processing speeds.

He also compares the iPad 2 to iPad 3 and 4 and here’s his verdict:My advice would be, if you want an Apple and can afford it, get the new iPad 4, with cellular connectivity if you can afford and use it. If money is tight, there are some very good offers on the 2 and 3 just now. The software is the same, the apps are the same, the processor is faster in the 4, if these things matter, buy the newer one.

I don’t need an iPad, but now I have one; I am learning to deal with its strengths and limitations. I didn’t set out to buy one, never actually swallowed the Apple i-trend. I was waiting for them to launch the iPatch, the iBall, but they hadn’t so far…

So how did I come by my iPad2?

Well, I won it in a competition in Dubai at the G-Max show. If you bought anything from a large retailer, you were entered into a draw, which gave one away every hour. Chances were high, and I was selected. My iPad2 was the prize, and I guess it was to clear stocks as the 3 and 4 have been launched since.

There is a large annual horse show at the Dubai World Trade Centre in March and we went along. Somebody with lots more money than me, and trust in his kids, had an iPad. The main use seemed to be to keep his children occupied playing games while he watched the magnificent horses performing. Then he decided to video one of the classes and I was mightily impressed when I looked over his shoulder and saw the results. A very clear image, no fuzzy legs and all in all a great video taken with indoor lighting. I rate the video capability highly, even if there is no zoom (unless it is hidden, for as you probably know I don’t read manuals).

I looked on in envy at his large screen and the high-quality image. My latest video camera is a few years old now, been used about 20 times and has quite poor movement stability. My horses look like they have 8 legs if they dare to run about while filming them.

So, how do I find my iPad now I have one of my own?

It hasn’t been an easy relationship, I don’t play computer games as I realised many years ago, day could become night and night become day before I managed to get to the next round, and I had to go to work. Once I mastered not playing, games lost their appeal.

A major part of the Apple experience is the downloadable software and the range of applications, some free, some you pay for. This seems to be the real difference between Apple and the other pads available. Apple in a recent survey had higher satisfaction, as the large vendors have similar numbers of applications available now. It also comes with some basic functionality, a web browser, email, a photo manager and the music. Other basic apps include messaging, a calendar, notes and reminders, maps but not yet Apple maps, as you may recall, that was withdrawn as it had too many bugs. Other applications include YouTube, a video player for playing downloads from iTunes, a games centre and iTunes and the apps store. And it has a Skype equivalent, Facetime, which I am told is private to apple devices, so not very popular or useful unless your friends and family only buy apple devices,

Good features come if you have an iPhone and or an iPod as you can share downloads and other files easily through iTunes software, which is downloadable for Apple and Microsoft computers over the Internet. 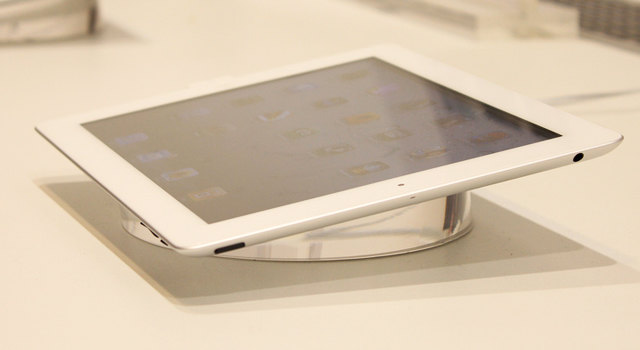 The iPad 2 displays pictures in no apparent logical order.

Loads I imagine, but I haven’t found out all of it. I used it to video a horse race meeting, and it was very impressive. I copied a load of photos onto it, so I could show people my horses, (they are very special to me, and also to a lot of other people – they have their own fan clubs which are nothing to do with me, except I took them to shows and they have achieved rather a lot.) Unfortunately, my pictures were intended to tell a story, but the iPad2 decides on the order it wants to use to display the pictures. No apparent logical order. I have read it uses the date of the image, rather than the name, I saved every image as a new file with a sequential naming approach, so if it used date or name I would be in control of the sequence. I am not. This aspect is very frustrating, and there appears to be no option to specify or change the order of pictures.

The iPad has more intelligence and turns the image up the right way.

My wife has an iphone and is predominantly left-handed, so all her pictures come out upside down as she presses the ‘shutter’ with her left hand. The iPad has more intelligence and turns the image up the right way. This is important if you post images onto internet sites, some software can turn the image around and some can’t. I have two videos of upside down horses running across the sky.

A security feature I do not need!

I have now downloaded a number of free games (with my wife’s help) and only find the password challenge annoying. I enter the password once, and then every other time it asks, even though I have not turned it off. I assume this is a security feature which I do not need as it never leaves my apartment, (except for horse racing). It has taken me an additional two weeks to write this article as I have started playing games again. Forgive me.

So how does it compare to the newer iPads?

The iPad 3 was quite short-lived as the iPad 4 was released about 6 months later. I have heard the 3 overheats, which could cause a costly repair or failure, as computer technology doesn’t like high temperatures. It is unusual for a company to release what is basically the same thing but faster after six months, so I would avoid the iPad 3 as I am suspicious. There are no cooling fans on the iPads so their design has to cope with the heat generated by the processor.

The 4 has ‘Retina Display’ which sounds strange. My eye has a retina, it helps me see, so isn’t every display a retina display? What it gives you is over 3 million pixels, so you have a sharper image. It has a faster processor, and offers that cellular connection I would have chosen if I had actually paid for it. I guess you need to build in the cost of the connection service if you are budgeting for one. Otherwise, settle for the less useful wi-fi only connection option.

Cellular connection would be useful for map reading. We went to Sharjah, and the Dubai taxi drivers get lost there usually. If you show them the map and trace your movement with one of the apps you can go anywhere. Me, I took it with me and found I could only see the Google Map around my apartment and where I had scrolled and it had remembered those bits I had seen, (they were cached somewhere). But not the bits of the map where I wanted to go.

The 4 also comes with an option of 128 gigabytes of storage, GPS through the cellular connection, and can be black or white. The design is very stylish, it is thin and tough, made of aluminium and glass. I wouldn’t want to drop it, and it won’t fit in my pocket. I have bought a plastic cover to protect it from knocks and stuff; it is very good and puts it to sleep through the clever use of magnets, which operate an on/off switch.

My advice would be, if you want an Apple and can afford it, get the new iPad 4, with cellular connectivity if you can afford and use it. If money is tight, there are some very good offers on the 2 and 3 just now. The software is the same, the apps are the same, the processor is faster in the 4, if these things matter, buy the newer one.

As a new user, you may need to talk to somebody else who has found out how it works, swipe and slide gives you zoom and scroll facilities; my first exposure to these were in the Minority Report a few years back.

One additional frustration is not unique to Apple, the connection cable is very much an Apple special, only works with Apple devices and only available at Apple prices if you break or lose it. I thought there was an agreed standard for all phones and similar devices announced about two years ago suggesting the use of the small USB plug as a standard so all devices could be connected and charged using a single charger/cable.

Steve Lenny is a Dubai-based consultant who loves photography and horses. Visit his website here.