Until recently, Ashok Ghadge, an interior products marketer, felt it sufficient to showcase his products to clients – interior designers and architects – by requesting them to download images and presentations from the pen drive he carried, onto their laptops or computers.

But in a world where technology has become the new marker of identity, Ashok thought he must upgrade to stay relevant in a business where ideas are exchanged visually. Telling us about his experience using the iPad 2 to explain concepts to his clients, he said, “It makes it easy for them to understand my language and for me to understand their language.”

While he first decided to purchase a laptop, Ashok quickly gathered that an Apple iPad would be most suited to his needs, not just for its portability, but also its implied status among his clients. While chatting with us, he put it best when he referred to the iPad as ‘the Mercedes of computers’. 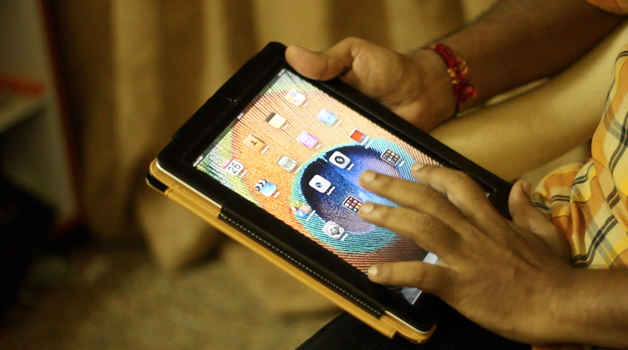 Although a considerable investment for Ashok, he is happy he chose the iPad 2. Even though this tablet does not have the much-hyped Retina Display of the New iPad, he is pretty satisfied with the1024X768 pixel resolution of the iPad 2. He says his presentations finally have a visual authority that helps convince clients of the products in his inventory. What he is most pleased with, however, is the tablet’s portability. Ashok can now browse work-related matter on the iPad during his long train rides home, saving him time to spend with his family once he reaches home.

At home, Ashok’s son is probably this new acquisition’s most loyal user. As 9-year-old Mayuresh effortlessly fingertips the screen to play his favorite game, Angry Birds on the iPad 2, Ashok tells us that for Rs. 38,000, the device has become a complete source of family entertainment. His daughter Ketki, 11, who watches patiently while her younger brother plays with the iPad, is also quite adept with the tablet, preferring to listen to songs or practice her drawing skills.