The Micromax Canvas Turbo A250’s claim to fame – other than the Hugh Jackman endorsement, that is – is the company’s foray into Full HD display. The phone’s super-neat graphics alone put it in the league of pricier, more coveted handsets like the LG Nexus 4. It was also the first striking feature that caught the eye of our reviewer, Mumbai-based businessman Karun Mukhi.

Karun is a Samsung Galaxy S3 user, and in this video, he compares the two phones that are almost Rs. 8,000 apart in price but more than comparable in terms of performance. In fact, Karun rates the cheaper Micromax A250 higher than his ‘slow and ponderous’ Samsung S3.

The Micromax Canvas Turbo looks like any Samsung Galaxy phone but slimmer and lighter, with 3 in-built navigation buttons at the base of the screen. The phone has a 5-inch glossy, Full HD display and runs on the somewhat dated Android OS, v4.2.1 (Jelly Bean) but with interface design that is far better than the S3 that operates the Android 4.0.4 (Ice Cream Sandwich). The body is 60 percent plastic with a matte metallic back. Since the A250’s back is non-detachable, it has relatively busy sides. One side has two micro-SIM trays and the other has the volume control and power buttons very close together. This design Karun found inconvenient when adjusting the volume while on a call. He feels the Samsung S3 with the volume control on one side and the power button on the other is more functional.

Two design features that Samsung got wrong and Micromax has corrected are the placement of the earphone jack at the bottom and the charger slot on top which makes more sense in terms of usability. 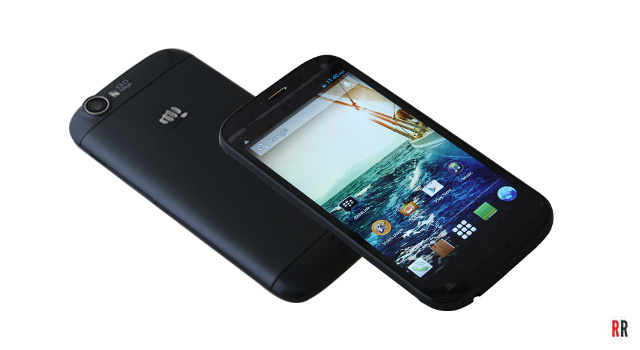 Karun liked the overall touch and feel of the phone and it took him just 30 minutes to get completely used to it. He found the interface smooth and much faster than his Samsung Galaxy S3, even though he complains of heating in the Micromax when downloading apps in succession or when on video chat on Google Hangouts. Another small grouse: on clicking a contact, the phone showed no messaging option so he had to go to the messenger app to compose a message!

Karun compared the sound output of the phone with his Samsung S3 and his PC using the same pair of earphones, and found the sound quality sub-par. Even the camera, 13 MP rear and 5 MP front, he says are not “something I’d sell the phone on”.

Bang for Buck
For the price of the Micromax Canvas Turbo A250, which as on the review date hovered around Rs. 15,000, Karun says the performance and graphics of the Micromax put it in the league of far higher priced smartphones in the market like the LG Nexus 4 or Moto G. And he’d pick it over the Samsung Galaxy S3 for superior performance at a much smaller price tag.

Karun’s verdict: “It’s definitely worth looking at over the competition.”

Samsung S3’s price listed on the website as on the publishing date: Best Buy Rs. 25,500