It’s safe to say that every Android user has always envied the hotshots with their iOS devices. Chatting with Siri, getting restaurant locations from Siri, and what not. Well… that’s old news now. Only a few days ago, Microsoft launched Windows Phone 8.1 (previously called “Blue”), an update to last year’s 8.0.

There’s a plethora of new features Microsoft will introduce with the arrival of this update – including a new notification location called Action Center, a new app managing software called Senses, and much more. This relatively “new” update will allow users to see detailed battery information, SIM data, and a lot more things, all of which will complement the Live Tiles design of the Windows Phone.

However, all of this isn’t as interesting as Microsoft’s brand new personal assistant: Cortana (yes, my fellow Halo players — it is inspired by our beloved character, and will be voiced by Jen Taylor, who voices Cortana in the game!).

This goes without saying, but Cortana is powered by Microsoft’s Bing. A voice-driven (but also text enabled) personal assistant, Cortana is able to do whatever you’d expect any standard PA to — and much more. Needless to say, it can offer personalised questions that you could ask, schedule and remind you of your appointments, check the weather, work in sync with built-in Microsoft applications, and all that jazz. However, there’s something that excites me much more — with Siri’s humour, support of Bing’s partners, and an amazing range of features, it has the ability to go beyond the norm.

Microsoft’s Joe Belfiore stated that they had approached real life personal assistants and asked them what they thought was crucial, and how they did their jobs (way to go the extra mile!). One thing they were repeatedly told that an assistant needs to understand and know the people you care about. Therefore, Microsoft claimed that the more Cortana is used, the better accustomed it gets to the user. It has the ability to understand the user based on their browser history, previous questions, etc. Cortana pins news articles that the user may be interested in, and it also asks you questions over the time of your use, based on your previous behaviour to give you a better experience.

Microsoft, in collaboration with Facebook, demonstrated how they have optimised their personal assistant so that on receiving command, Cortana can display what a specific friend is up to on Facebook, by displaying their activity timeline. Another demonstration showed that using ‘notebook’ feature, users can create notes that it will use to remind them of specific tasks. For example, if you tell Cortana that it should remind you to ask your mother about a recipe the next time you talk, you will receive a notification when you next send a text message, voice call or email your mum. Using the ‘notebook’ function, you can modify Cortana to deduce who you are close to (i.e friends and family), and when it is likely that you are free, or when your “quiet hours” are. People who aren’t a part of your inner circle will be redirected to leave a message, so you are not disturbed in your busy hours. I like! 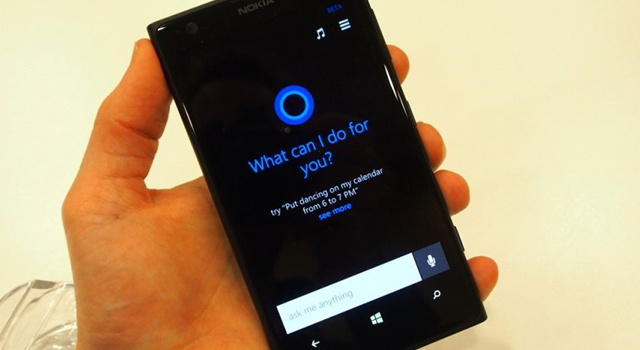 What I really am looking forward to is seeing how developers integrate their applications for Cortana. That’s right! Using Cortana’s APIs (application programming interfaces), third party apps can also tap into the software. But, it doesn’t end there — very similar to Google’s Knowledge Graph, Cortana is able to (with proper permissions) access the email on your phone, and recognise reservations, flight schedules, meetings, etc. This enables her to remind you when it’s time to leave, as well as if there’s any changes in your scheduled flights. But hold on. Cortana is smart enough to notify you if you have any clash in events, and can suggest how you can combine your trips. Also, the fact that Cortana is powered by Bing also means it can tap into a cornucopia of information about restaurants, places to visit, finance, sports, business, etc. — everything that Bing is known for.

But, as BBC Tech reported, Cortana isn’t without glitches. During a recent demonstration, Cortana failed repeatedly to change the unit of the weather calculation, as well as misunderstood a call command. We can excuse this (for now), because it is still in beta mode. While I have no major complaints, I cannot deny that Cortana has borrowed heavily from Google Now and Siri. Overall, though Cortana is still beta, it still shows great prospects for any average Windows Phone user.

What’s sad is that the 8.1 will only be available in India in 2015, while the States, UK and China will experience it within this year. Will rival Apple step up their game, too? We can only wait and watch!

Meanwhile… let’s go back to dissing at the Live Tiles. (Joking!)